Emergency Snow Loads - Are you Prepared? 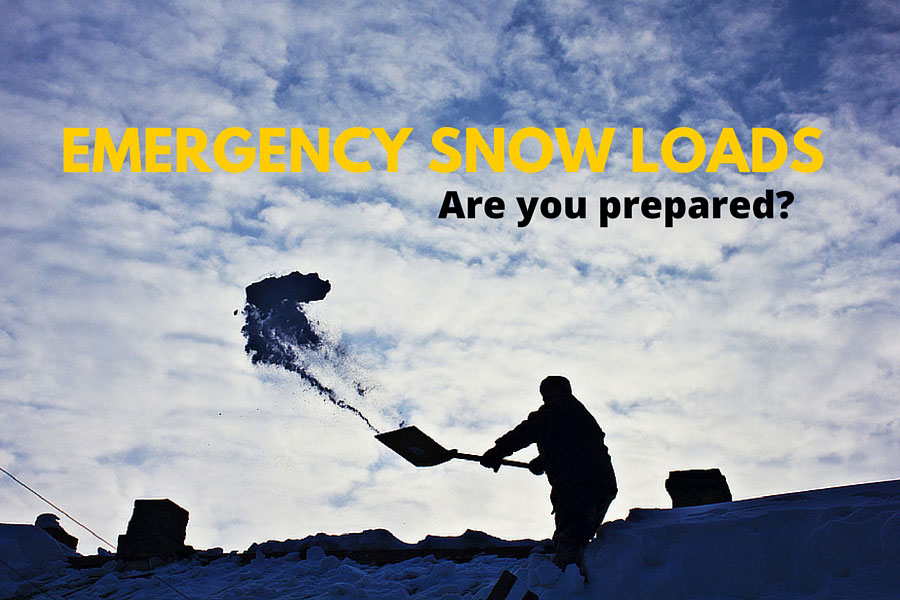 You’ve seen it played out in cinema time and time again.  A snowstorm comes and people argue over who’s going to clear it.
What?  You don’t remember seeing that in any movies?  Really?  Well, take this classic scene from “A Few Good Men” for instance:

Fine, maybe that’s not quite how the line goes, but close enough.  The point is, I’m sure that whenever there’s a heavy snowfall around the world, there are similar conversations occurring (though, probably arguing to be the one to NOT have to go on the roof).  The infrequency of snowfall in some areas, and the unpredictable nature of it, lead most people to not think about snow and its effects until it happens.  Who thinks about being buried in mounds of snow in the heat of summer?  Who worries about snow loads when the most you usually get is just a few inches?  The answer: very few people.  In fact, up until 2013, while FEMA had contingency plans for flooding and earthquakes, there was no such document related to snow and its roof loading.

In reality, the vast majority of the time, a roof won’t be affected by snow and attempting to clear the snow will be a much greater hazard than just waiting for it to melt on its own.  However, that’s not always the case and during the recent blizzard in the northeast, a number of buildings lost their roofs due to snow, including a church in Downingtown, PA, part of the roof of a sports complex in Rahway, NJ and a Trader Joe’s in Westfield, NJ.  It is much better to be prepared than to suffer such property damage (which, of course, also puts people in harm’s way – whether it be patrons of the facility if they haven’t been kept away by the storm or the people scrambling to clear the snow before it’s too late).  Perhaps it’s not often that that type of snowfall occurs in the area, but as Mrs. Gump told her son:

Forrest Gump: “Mama always said snow was like a box of chocolates.  You never know what you’re gonna get.”


Know What You're Working With

To begin with, do you know what amount of loading your roof is capable of withstanding?  Without this information, knowing how much snow you’ve gotten is meaningless.  Snow load takes into account many different factors including the shape of the roof, the slope of the roof, its wind exposure, the ground snow load value (weight of the snow on the ground), roof obstructions, thermal conditions of the roof and, less obviously, the importance, occupancy, and use of the building. For instance, a hospital could be designed with higher snow load values than, say, a building of self-storage units.
Once you determine the roof snow load value (while there are various calculations and actual calculators floating around the web, if you have the ability to talk to your building engineer, it is probably the best course of action), you need to understand how much snow weighs.  Light, dry, fresh-fallen snow, one-foot deep will weigh approximately 3 lbs/ft2 whereas the same amount of wet, heavy snow could weigh 21 lbs/ft2.  Ice, on the other hand, could greatly outweigh even wet snow.  Ice, at one inch thick weighs approximately 57 lbs/ft2.  With everybody worried about snow loads, perhaps ice loads should actually be top priority!
Remember, these are approximations so, while they aren’t giving you an exact amount, they could give you a ballpark figure to work with to let you know if you are even approaching danger.  Also, keep in mind that while snow will fall fairly uniformly, if you add wind to the equation you could end up with serious snow drifts that can drastically increase loads in certain areas of your roof.

Once you have these figures, communicate with the people who need to know: those developing your plans, those implementing the plans, and those in charge.  You’ll recall, shortly after a roof collapsed from a heavy snow in Cool Hand Luke, Captain pointed out the reason:

Captain: “What we’ve got here is failure to communicate.”

If you determine that you need to remove snow or ice from the roof, what are you doing to protect your employees?  In a recent article, Dangers of Accessing a Roof in the Winter, we discussed the inherent dangers of being on the roof after a snowfall, but if your people have to be there to prevent your roof from collapsing, they will need to be protected from falls.  While workers should be protected from falls at all times while on roofs, one of the activities that will put them at the most risk is dumping snow and ice over the side of the building.  During this activity, it is imperative that workers are properly protected.  This can be achieved by tying off to suitable anchor points or by ensuring that workers are safe behind railings (or parapets of sufficient height if you are lucky enough to have them). However, you’re not going to be able to set up those railings safely after you’ve got a ton of snow on your roof.  You need to plan ahead.   Even using a fall arrest system will prove difficult without planning as you may not have a suitable anchor available.

In addition, you’ll need to ensure the area you are dumping is not an area that will have foot traffic below.  If there is any chance of employees or the public passing underneath, you need to cordon off the area until clearing operations have ceased.

If you need to get up top to clean the roof, and tying off is your only option, what are you tying off to?  Not only may you not have something that can withstand 5000 lbs. of force per person attached (for the most part), even if you do, it could be buried with snow and difficult (or impossible) to locate.  This will be a big problem on sloped roofs where fall arrest systems, or positioning systems, will be your only option.  In this case, before the snow comes, ensure that you have engineered, raised anchor points installed so you are prepared for the worst case scenario.

Know Who is Working For You

If you don’t have the proper employees for the job, you may need to hire an outside contractor to do the snow/ice removal.  Understand what their capabilities are and their response time before you sign any contract.  In a fast, heavy, wet snowfall, small amounts of time could be critical.  Many people whose main work slows down in the winter will offer snow removal services.  Be cautious.  You need to know if they have the experience, the manpower, and the equipment to properly service your needs.  How and when will they perform removal?  How will they perform it safely?  Are they insured for this type of work?  Don’t open yourself up to lawsuits just because somebody else is trying to make a quick buck in their off-season.  Remember, there are very skilled snow removal people out there, as Liam Neeson, a skilled snow-removal contractor pointed out to a fly-by-night, overpriced contractor in 2008’s Taken:

Mills: “If you are looking for ransom, I can tell you I don’t have money.  But what I do have are a very particular set of skills, skills I have acquired over a very long career.  Skills that make me a nightmare for people like you.”


How Do I Know if There is a Problem?

According to FEMA, there are a number of warning signs.  Should any of the following occur, it could be an indication of the beginnings of roof failure:

If you observe any of these warning signs, you should have the building evacuated and inspected by a qualified engineer.


Don’t let snow loads sneak up on you.  Take the time to prepare for the worst so that your employees and your property aren’t in any danger.  You can’t put it off until tomorrow, because, as Bill Murray so eloquently pointed out in Groundhog’s Day:

Phil Connors: “Well, what if there is no tomorrow?  There wasn’t one today!”