It Won't Happen to Me! 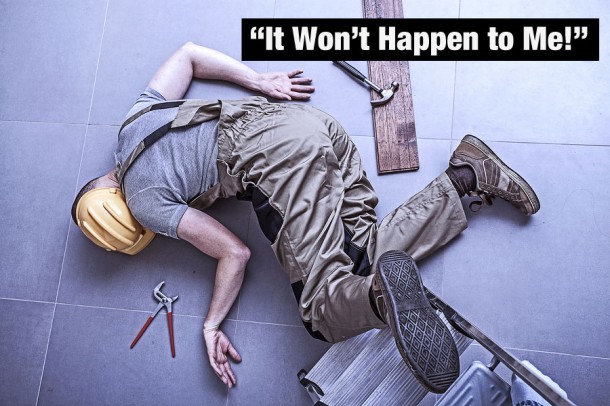 This is an attitude most workers seem to have. And why not? No one goes to work, thinking, "I am going to get hurt today." Although it seems somewhat pessimistic, workers should be thinking "I could get hurt today, so I will take every precaution to prevent it."

My husband, Russ, had the attitude "It won't happen to me". He woke up on the morning of November 8th, 1995, kissed me goodbye, looked in on Spencer, our two-year-old, and left for his job as a commercial painter.

A self-proclaimed "risk taker", Russ often took shortcuts at work. It was a typical rainy day in Washington, and he and his team were going to pressure-wash the outside of a pulp mill. As soon as they got their spider unit (scaffolding) set up, management called everyone in for a safety meeting. This was considered nothing but an annoyance to Russ, but he signed the clipboard, and was just glad to come in out of the rain. He doesn't remember, to this day, what that meeting was about.

The team went back to work, then broke for lunch. After lunch, the pulp mill required them to attend another safety meeting. "Not another one!" he thought, but grabbed a candy bar, put his feet up, and paid no attention to the presenter, who talked about fall protection.

After the meeting, he and his team were moving their spider unit, and he thought his safety line was too short, so he unhooked. His coworker shook his head, and told him it was a bad idea. Russ ignored him. The scaffolding got stuck, so Russ climbed up on the handrail, to get better leverage. He got shivers down the back of his neck, but ignored them, as well. He even convinced himself that if he would possibly fall, that there was enough conduit and crossbeams, and that he had fast enough reflexes, that he could catch himself. Even as he was falling, he thought he could just "roll, and walk it off."

Even when he came out of the MRI machine, and the doctor told him his spinal cord was severed, and he would never walk again, he thought, "Yeah, right...I'm young and strong. It might take a couple months, but I'll be good as new."

After living as a paraplegic for eighteen years, Russ now says, "It happened to me, and it will happen to you, if you feel you are invincible, and continue to work unsafe!" "Think of your family when you are at work. I wish I had thought of mine." Not one day is the way it used to be, for us. Family relationships were strained, homes and vehicles had to be modified, and jobs were lost. Favorite fishing holes became inaccessible, friends disappeared, and days were spent in waiting rooms, because of complications of paraplegia (22 surgeries in 15 years). Spencer was never given the opportunity to be a big brother, and Russ' life expectancy has been shortened...all because of a split-second decision.

There are many ways this accident could have been avoided. Had he been engaged during his first fall protection training, or even during just one the safety meetings that day, it may not have happened . When the spider unit got stuck, he could have asked a supervisor what to do. If he would have paid attention when his coworker warned him not to unhook, or even if he would have listened to his own uneasy feeling, our lives would not have changed drastically, in that next moment.

Russ and l now travel the country, and share this message of personal accountability, with the hope that just one "risk taker" from each audience will remember us, and think twice, before taking a dangerous shortcut.