Positioning Devices: How Do They Differ from Personal Fall Arrest? 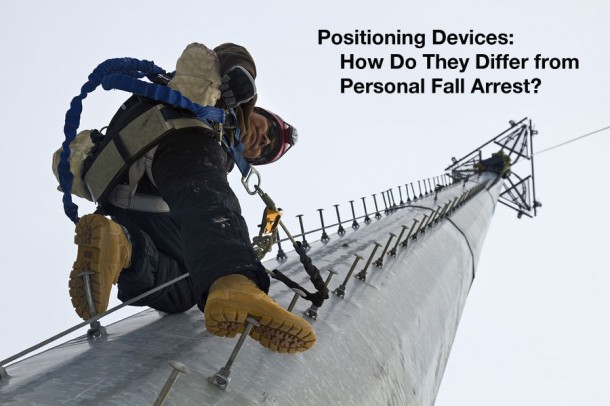 When considering fall protection solutions, people often consider Personal Fall Arrest Systems and railings as the only two options available. In some cases, that might be true, but in other cases, it puts an undue burden on the person trying to come up with the solution by eliminating other safe, compliant options. In some cases, a Positioning Device System may be one of those options.

According to the definition found in the standards, a positioning device system is a “body belt or body harness rigged to allow an employee to be supported on an elevated vertical surface, such as a wall, and work with both hands-free while leaning.” Think about an ironworker who is tying rebar for a pour-in place wall. That ironworker needs to scale the existing rebar, get to the work location and have some type of support without setting up scaffolding since the work moves pretty quickly. In order to do this, they take advantage of the aforementioned Positioning Device System. The system allows them to hook their body belt or harness to the rebar, then lean back. It keeps them in place so they can do their work while using both hands.

Notice the use of the words ‘body belt’. This is one of the only situations in which a body belt is allowed to be used. The Positioning Device must be rigged so that no more than a 2-foot freefall may occur. This means that the forces incurred by the body in the event of a fall would be much less than those incurred while using a Personal Fall Arrest System. In addition, there is limited possibility of movement, meaning that a fall while using a Positioning Device would most likely be because the worker’s feet slipped from their perch. The resulting fall would be a short distance, feet-first, straight down. A fall while using Fall Arrest could be feet first or head first and could result in swing. The short freefall distance and the limited movement allow the body belt to still be a viable option.

Aside from the body belt and the allowable freefall distance, the requirements for a Positioning Device System are pretty much identical with those for a Personal Fall Arrest System. What the components need to be made of, the minimum load capacities and strength of the components, and how the hooks may be connected are identical in the two sections. Because of the inherent dangers of an actual fall, the Personal Fall Arrest System has many additional requirements, but the fact that almost everything found in the two sections is identical should make utilizing Positioning Devices simple, since most safety professionals are already very familiar with Fall Arrest.

Positioning Devices may not come into play often, depending on what field you are in, or they may be every day fixtures in your workplace, but either way it’s important to exhaust all your options. An unseasoned safety professional who hasn’t run into Positioning Device Systems before might be tempted to immediately issue a violation due to the body belt, so it’s important to understand the applicable regulations. Help keep your workers safe by fully understanding the solutions available to them.