Should Safety Be Incentivized? 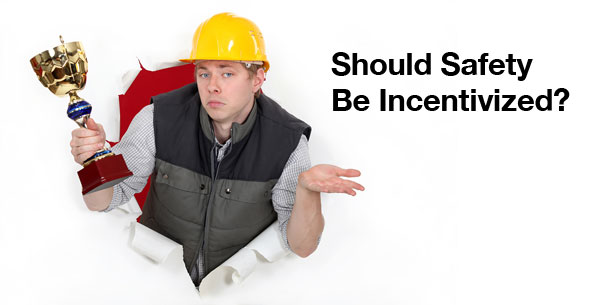 This is the million dollar question, isn’t it?  For years, many of us in the industry watched as prizes were awarded to workers based on safety performance.  Sometimes this meant a group lunch or a t-shirt, but other times it was something as big as a truck or boat being given away.  This sounds great - generous even – but is it doing more harm than good?

What is the Issue?

The general concern with safety incentive programs is that while it may make workers think twice about doing something unsafe, it may also have the unintended (we hope) consequence of making workers hide injuries.  Let’s face it: who wants to be eliminated from winning that boat because they sliced their finger open and needed a couple of stitches when that can easily be fixed by a quick visit to the emergency room and a little white lie that you cut yourself at home?  Who wants to be the guy that gets an entire crew eliminated from the running because they broke a toe or two and needed to stay off their feet?

What does OSHA Say?

This question has been debated ad nauseum among safety professionals, but before we approach this from their point of view, let’s first take a look at what OSHA has to say about it.  According to a March 12, 2012 memo released to the agency’s regional administrators (https://www.osha.gov/as/opa/whistleblowermemo.html), OSHA feels that while most incentive programs have good intention, they often create the unintended consequences mentioned above.  Under point #4, the memo states:

Finally, some employers establish programs that unintentionally or intentionally provide employees an incentive to not report injuries. For example, an employer might enter all employees who have not been injured in the previous year in a drawing to win a prize, or a team of employees might be awarded a bonus if no one from the team is injured over some period of time. Such programs might be well-intentioned efforts by employers to encourage their workers to use safe practices. However, there are better ways to encourage safe work practices, such as incentives that promote worker participation in safety-related activities, such as identifying hazards or participating in investigations of injuries, incidents or "near misses".

The point of this portion of the memo is that if your employee feels pressured to not report an injury or illness because of your particular incentive program, it could be considered retaliation under whistleblower protection statutes (in other words, if you report an injury, you don’t get a bonus).  OSHA does allow, in this memo, that a company would need to take into consideration whether the incentive award was or was not substantial enough to dissuade an employee from reporting in order to determine if it falls into this retaliation category.

In the end, OSHA’s stance is gray, and therefore, so is the answer to this question.  OSHA does not come out and prohibit safety incentives.  In fact, they state in the memo that they appreciate employers attempting to use safety as a performance metric, but they recognize the inherent danger in such a program.

Since OSHA does not ban incentive programs, you – as an employer – need to decide if having one is right for you and, if so, how it should be run.  Some people that I’ve discussed this with simply do not believe in safety incentives.  Their belief is that you already have two built in incentives:

Number two is interesting in that it infers that incentive programs propagate the belief that safety is optional; that safe work practices are to be followed only if you want to get a little extra something from your employer.  This is most likely not the message you are trying to get across.  By saying that a worker’s paycheck is their incentive, you are making the point that safety is part of your employee’s job, and it is expected of them just as much as you expect them to be at work on time and to perform quality work.

Still, many companies feel they need that extra something to get their workers to follow what may sometimes be time consuming or cumbersome rules.  The key is to find a balance.  A reward that is too large could cause employees to hide injuries while a reward too small could have no positive effect.  A reward for injury-free work may need to be balanced by an equal punishment for failure to report.  This, however, could also lead to murky waters.  A punishment for failure to report could easily be twisted to appear as a punishment for getting hurt and you’re back in the realm of ‘retaliation’.

Perhaps the best route to take is one that OSHA recognizes in their memo and one many safety professionals struggle with: leading indicators.  For years, the focus of incentive programs or recognition awards has been on trailing indicators: recordable or lost time injuries, OSHA incident rates, and similar metrics.  This measures employees after the fact, rather than trying to encourage them to be proactive.  Some leading indicators include participation in incident investigations, number of near miss reports, and training sessions attended.  The catch here is that:

These indicators may be a good starting off point, but a program needs to be developed to effectively utilize them.  Can it be successful?  Sure, but so can an incentive program using trailing indicators when developed properly.

And that’s where the key lies: a properly developed program.  Should safety be incentivized?  If you and your company are willing to put the time and resources into developing an effective program that is beneficial to the well-being of your employees yet doesn’t have negative unintended consequences, yes!  If not, then avoid incentives because they’ll be nothing more than a dog-and-pony show that not only may not work, but may actually put your employees in harm’s way.

What do you think? Share your thoughts in the comments section below.