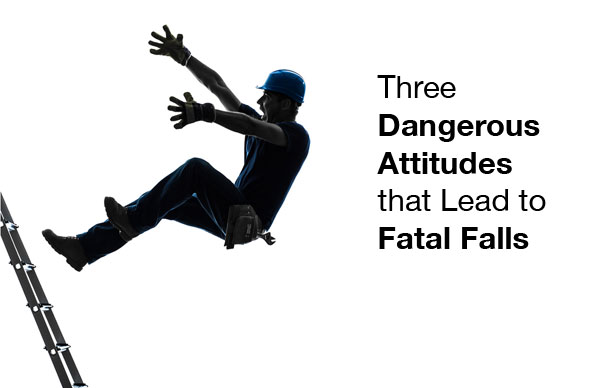 Despite efforts to reduce falls, they still remain the number one killer in construction.  They also account for approximately 12% of fatal occupational injuries across all industries (http://www.bls.gov/news.release/cfoi.t01.htm). We educate, inspect, and discipline, yet falls continue to occur.

While it’s true that in 2012, 25% of fatal falls occurred in falls greater than 30 feet, it is also true that 25% of fatal falls occurred in falls less than 10 feet (http://www.bls.gov/news.release/cfoi.nr0.htm).  Let’s allow that to sink in.  Just as many people died from falls less than 10 feet as from more than 30 feet.  Fall fatalities aren’t all about how far you fall and how hard you hit the ground, but also which body part hits.  Striking your head at any height can be fatal.  There’s a reason OSHA’s fall protection rules don’t begin at 20 or 30 feet – because you don’t have to fall far to be seriously injured or killed.

Some people actually believe that their reaction time is so good – that they are so quick – that if they were to fall, they would just catch themselves.  While this might work if a) you felt like you were about to fall and b) there was actually something nearby to grab onto, the fact of the matter is if you do fall, you are out of arms reach in a blink of an eye.  Let’s take a look at how fast you fall:

Six feet in half a second.  It’s probably safe to say that nobody reading this article has arms six feet long or can react in less than half a second.  In one second - perhaps the amount of time it takes for your brain to consciously register “Oh, this is happening” - you’ve already fallen 16 feet.  In many situations, this will mean you’ve already hit the level below.

“I Have Good Balance”

Maybe so.  In perfect conditions, this may be enough to keep you safe, but in what job do you have perfect conditions and a perfectly controlled environment?  If we’re speaking about construction or other outdoor work, you may have an unexpected gust of wind or a misty rain that’s making your walking surface slippery.  A co-worker or piece of equipment may have spilled an oily substance that you are unaware of.  Something could swing into you or your path, such as a rigged load on a crane, or equipment being set by a forklift.  Worse yet, you could back up and trip into a skylight and, like Joe, fall several stories to your death.

Or, your own health could work against you.  Anybody who has ever experienced an attack of low blood sugar can tell you that it can be both dizzying and unexpected.  A mild heart attack could be survivable, but probably not at 30’ with no fall protection.  Who hasn’t, at some point, moved just a little too quickly and experienced a ‘head rush’?  Any of these things could result in an otherwise ‘balanced’ worker plummeting to their death.

A fall is a fall.  Once it happens, there will be no dramatic life-saving fingertip catch by your co-worker like you see in the movies.  Falls can happen and, unfortunately, do happen.  Every single person who has died from a fall, in which the victim was not utilizing provided fall protection, most likely believed one of the myths above.  Otherwise, knowing the potential result of their actions, why would they have chosen to forego it?  Wear your fall protection, because nobody can defy the laws of gravity.