Why Can’t My Managers Get My Staff to Comply? 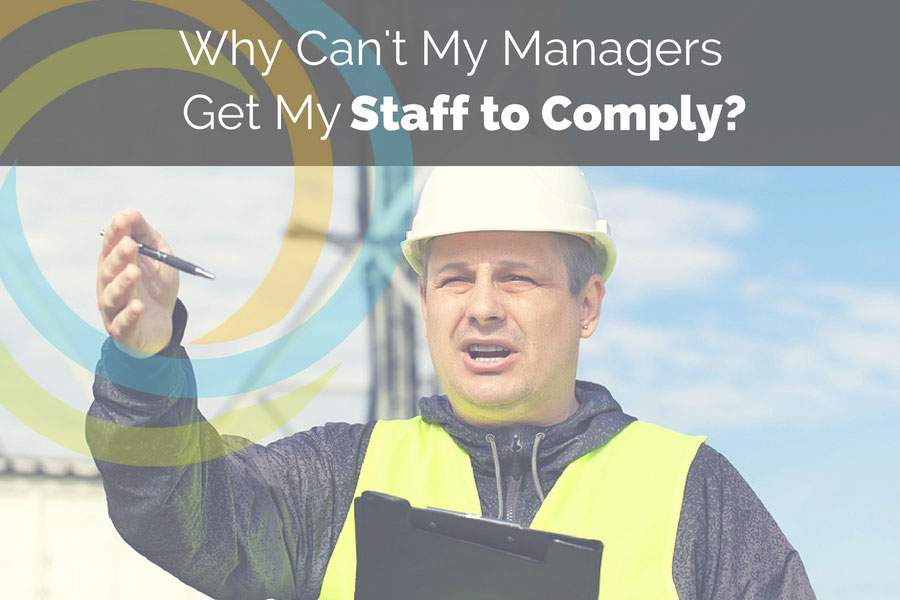 Sometimes you can have the best program on paper, but it doesn’t seem to be translating well to real-world implementation.  Maybe your workforce is telling you they like the program, but every time you observe them, they’re breaking the rules.  Maybe your supervisory personnel seem reluctant to enforce the program.  Whatever the breakdown, a great written policy means nothing if it’s just a dust collector on your shelf.  So, where might the breakdown be?

Often, the breakdown does not lie with the line worker, construction crew member, maintenance staff, or other personnel whose work the policies and procedures most directly affect.  Sure, they’re breaking the rules, but they do this because somewhere along the line, this has become acceptable.  Something has shown them that they can get away with this behavior.  The real source of the problem, when it comes to implementation failure, often lies with supervisory personnel and/or company executives.

Everybody needs motivation.  Some people will follow company policy without question, but others will be resistant to change.  Perhaps the idea of a safety program seems like too much work or a distraction from what they consider their “real” duties.  Others might see it as added work without a clear idea of “what’s in it for them.”  If a supervisor is unwilling to enforce your rules, then you have no chance of getting their subordinates to comply.

In order to motivate supervisors you need to provide them with incentive.  That doesn’t necessarily mean implementing an incentive program, per se, but rather giving them ownership of the program and accountability for its successes and failures.  In order to do this, supervisors must first be made aware of why they need to implement a safety program and how important it is to the company.  This should be coming from company executives, not from a peer.  The higher up the person introducing them to the concept, the more likely they will be to follow it (as long as they see that any superiors between them and the executive are completely on-board).  Let’s say the company’s CEO stops into the plant to meet with the supervisors regarding the company’s safety performance and its need to implement a new program.  The CEO must be authentic.  If they could care less about the program, your company personnel will sniff that out right away and your program will fail before it even begins.  If they’re doing it simply to save a few bucks on insurance, the supervisors and other employees will detect those motivations immediately as well.  It's not that it’s bad to want to save money, but if it’s obvious that the new program is all about that and avoiding injury is only a lucky by-product, it will be hard to achieve any level of enthusiasm.  In other words, it needs to be true – and obvious – that the company cares about the well-being of its employees.

From the moment the program is launched, management needs to lead by example.  You can’t expect workers to wear their safety glasses and steel-toed boots 100% of the time when your VP walks the floor in tasseled dress shoes and no eye protection.  Not only is that poor leadership, but if there truly is a hazard that requires this PPE, then they are putting themselves at risk for injury.  A flying piece of debris does not care if the eye it’s about to enter belongs to a laborer or the company owner.

Instituting an incentive program for supervisors is always a good way to get buy-in, but it probably needs to be different than what you’re offering their subordinates.  Point systems for prizes or gift cards for dinners only go so far.  They build incentive, perhaps, but no accountability.  Tying a portion of a supervisor’s annual bonus, for example, to the company’s safety performance, the safety performance of their direct reports, or both, is often effective.  They can make extra money with good performance, but lose a portion for bad performance.  Be sure to use leading indicators (safety meetings held, near miss reports submitted, training completed) rather than lagging indicators (number of injuries, number of days away from work).  Using the latter can run you afoul of OSHA’s new recordkeeping rule (click here for more information).


Wrong Person for the Job

Sometimes people find themselves in supervisory positions for the wrong reasons.  Maybe they’ve lasted longer at the company than everybody else or maybe they are really good at the job being performed.  These are great things that make up part of what it takes to be a manager.  Managing takes interpersonal skills, time management skills, conflict resolution skills, and some understanding of the legal liability inherent in his or her position (among other things).  Just because a worker operates a forklift better than anybody you’ve ever seen doesn’t mean they can manage the warehouse.

If the person in charge of implementing your program lacks any of the aforementioned skills they may give up on trying to get the workforce to comply the moment they get push back.  Heck, they may not even try in the first place.  In these situations, you sometimes end up with what I call ‘the reluctant manager’.  This is the person that accepted the job (maybe for the pay raise, maybe because they were honored by the offer, maybe because they were afraid they’d be fired if they refused it) but doesn’t necessarily want the responsibility.  Sometimes, you’ve promoted from within and the supervisor is still trying to be buddies with all of the employees rather than trying to successfully manage them.  These are recipes for disaster for your program.

A reluctant manager may take the approach that they’re as annoyed as the rest of the workforce with the safety program, but it’s something they’re being required to do.  This is going to set the tone for performance.  Think about it.  How would your employees react to, “Hey guys, listen, we’ve gotta do this stupid safety thing.  I know it’s a pain in the butt, but we have to do it, so don’t give me a hard time,” versus, “Guys, the company has been reviewing our safety performance and has determined that the rate at which our employees are getting hurt is unacceptable.  Not only does it affect company performance, but guys are out on worker’s comp collecting partial pay instead of their full salary.  Employees’ lives are being affected because these injuries prevent them from doing things with families and friends that they love to do.  It’s time to turn this around with this new program and it’s my job to implement it.  I expect full cooperation.  If you have any questions or concerns, please come speak to me, but rest assured, failure to comply is not going to be tolerated”?

A manager that is trying to remain friends with the staff may not be the person for the position, however, when hiring from within the opposite situation can also be a problem.  Your manager may very well be trying his or her hardest to manage, but they are not getting the cooperation or even the respect of the workforce.  This may become painfully evident when that manager tries to implement the safety program.  Sometimes it just takes a company executive coming to speak to the workforce about the employee’s promotion: why it was needed, what this person has done to deserve it, and what their role is.  It needs to be left that in no uncertain terms this person is now their supervisor with full support of the company.  Even with all that, you can’t make them respect this person, but hopefully you can get their cooperation.  Respect will have to be earned and commanded by the manager in due course.

Just as the expectations need to be set with the workforce, whether with an internally promoted manager, a new hire, or an existing manager that is just being introduced to your new safety program, you must also set their expectations.  Ensure that they know that safety is their job.  Even if you have a corporate safety director or a field safety manager, a safety program will not work if management isn’t enforcing it.  They need to understand that it is as important a job as everything else they do.  Don’t feed them a line about “safety first” because the first time you or somebody in your organization puts schedule or profit ahead of safety (and it will happen, unfortunately) they’ll really understand where safety lies among the company’s priorities.  Instead, explain to them that safety, production, and quality are all equal and that no one of those can be successful without the other two.  And mean it.  If your manager gets reamed out because he or she had to delay starting one day because some fall protection harnesses were bad and somebody had to replace them, he or she is going to know the company doesn’t value safety over schedule.  In the future, they’ll act accordingly.

If they do know what their role is, do they understand safety itself?  Maybe they’re really good with your people.  Maybe they really understand the methods and procedures you have employed until now.  But, do they know the regulations that apply to the work they’re performing to know if those methods and procedures are in compliance?  Do they have the ability to analyze a task and determine its hazards?  Do they have the ability to abate those hazards?  In other words, have they received the proper training, or have they just been told – “safety is now your job”?  Training is key.  If your managers don’t understand safety, how can they manage it?

From all this, we can see that implementing a safety program is much more difficult than grabbing some boilerplate program and telling your employees to run with it.  Everybody, top to bottom, has to be trained.  Procedures need to be customized to be applicable to the work you’re performing.  But, most importantly, your supervisors need to be on-board.  Without them giving 100% to program implementation, without them displaying the proper knowledge and attitude, without a clear-cut consistent safety message at all levels of management, your program is doomed to failure.  Get your supervisors involved and accountable and your workforce will quickly follow.