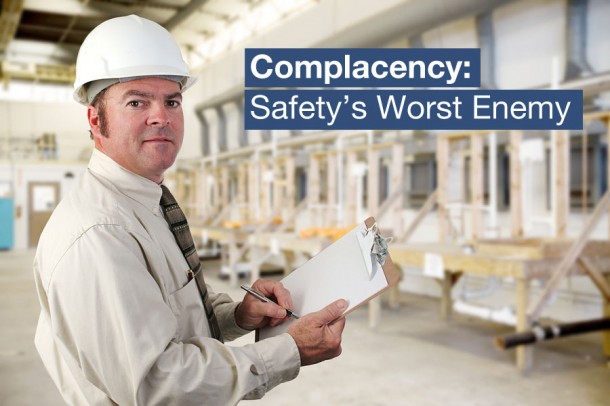 Safety has many enemies - budget, schedule, regulatory ignorance, and leadership indifference, to name a few – so maybe saying complacency is its worst enemy is a bit of hyperbole. Then again, maybe it’s not.

Each of the examples I mentioned is lacking one key ingredient that sets complacency apart from the rest: a false sense of security. When money, time, or enforcement becomes an obstacle to safety, the workforce will usually know this. If they continue to do their job, it is probably with added measures of precaution. And, while heightened awareness alone does not make for satisfactory protection, it is better than nothing.

Similarly, if a worker is not aware of safety regulations, it does not mean that he or she does not know how to work safely, it just means that they are not aware of the government’s specific requirements. That worker will most likely know or at least feel that something is unsafe and try to protect himself or herself in some way. I’m not saying that the solutions they choose will be perfect, or even very good, but awareness will always increase your odds of working without incident.

Complacency occurs when you’ve been doing something one way for so long without incident that you assume there can never be an incident. Whatever it is that you’re doing must be effective because, until now, there have been no issues. It’s the classic “I’ve been doing it this way for 20 years, and nothing has ever happened to me” Syndrome. This frustrates safety professionals because we know that nothing ever happens to anybody – until it does. In other words, every single person that has ever been injured or killed on the job could have said – until that point – that this is the way I've always done it and nothing has ever happened to me.

A Deadly False Sense of Security

A false sense of security does not go well in any industry, but it could be most dangerous in construction where things are constantly changing. The environment you are working in today could be a completely different environment than the one you worked in yesterday. A new excavation could have opened up next to you or a crane pick could be going on above you. Electrical equipment that was not energized yesterday might be energized today. That perimeter cable that was nice and taut yesterday, might have been loosened for some reason since then and left that way.

In a constantly changing environment, extra vigilance is needed, but workers still become complacent. Inspections fail to happen and workers walk or move equipment without looking where they’re going, to the point where, from a safety standpoint, they seem to be sleepwalking through the job.

That’s not to say that complacency isn’t a problem in other industries. Take the worker on a manufacturing floor for example. He or she has inspected this same piece of equipment every single day for the last five years. There has never been a problem. The worker decides to blow off an inspection and get right to work. Then another. Soon, he or she is only inspecting every other day. Maybe even less frequently.

It could be a fire. It could be somebody getting injured because a machine guard was missing. It could be any number of things, but whatever those things are, they were brought on by complacency.

How to Fight Complacency

The only fix is constant vigilance, but how is that achieved?

Nothing beats complacency like regular reminders. Morning meetings are effective in this way; they allow you to bring safety awareness to the forefront of everybody’s minds first thing in the morning each and every day. If the job doesn’t allow for daily meetings, at least plan for one at the beginning of each week to get people refocused on the work at hand.

Signs may blend into the background, but good eye-catching signs can be effective against complacency. Even if they make just one person think more about safety, they could be preventing a deadly incident.

And finally, there’s oversight. This is the greatest role of an on-site safety professional: preventing incidents – recognizing hazards and mitigating them. Everybody on a site or manufacturing floor or in a warehouse should be working with safety in mind, but we know that sometimes work and life get in the way. The safety professional’s role is to be the one that doesn't get complacent – the one that always has safety at the forefront of their attention. His or her presence is often enough to get workers thinking more about how they’re working, but beyond that, they can spot where breakdowns are occurring – inspection forms not being filled out for example – and make sure they get rectified.

Fighting complacency is a team effort. Don’t allow it to creep in while you aren't looking. Stay vigilant and ensure that those that work for you and with you are remaining vigilant with as well.