Is Your Safety Program Human-Proof? 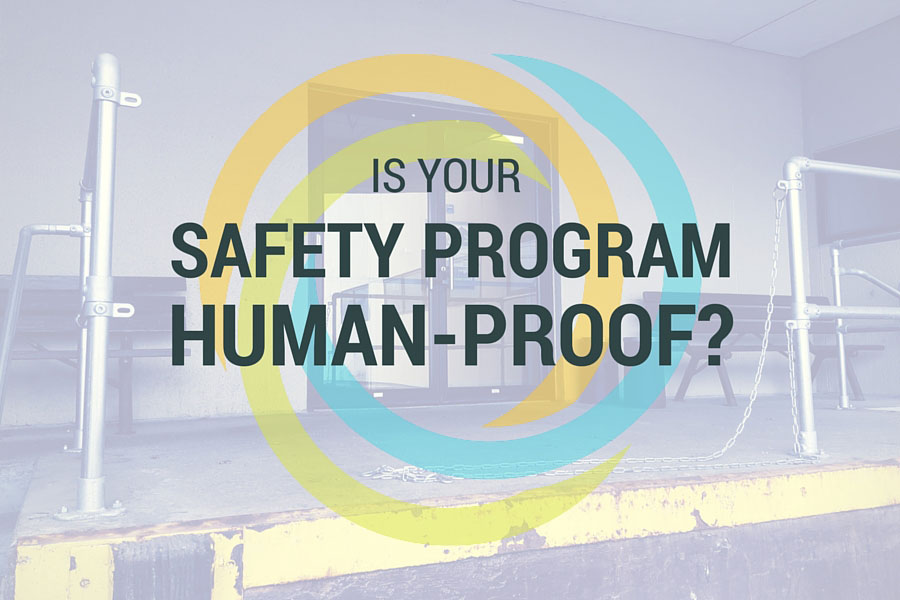 No safety program is perfect for one simple reason: people aren’t perfect.  No matter how many policies you put in place, no matter how much equipment you buy, no matter how much training you do, in the end, you are depending on human beings to implement your safety program, and human beings make mistakes.  Forget those that intentionally bypass the program, all it takes is for somebody’s timing to be off, their depth perception to be less accurate than they thought, their judgment of good and bad ideas to be less than ideal, and you have a failure.  And what of the physical failings of human beings?  Some aren’t as strong as they think.  Others, stronger.  Some could experience a medical condition they didn’t know they had, that came on suddenly, or that was exacerbated by the work environment.  These could also lead to program failures.

How should a company deal with the human factor?  The answer might be by human-proofing as much as possible.  You will never be able to do it 100%, but you can minimize your exposure to human failure in a number of ways.  Here are just a few examples:

The less a person has to do to return an environment to a safe state, the better.  If you place a chain at the top of a ladderway or at the edge of a platform, it is possible that more often than not – whether out of laziness or forgetfulness, that chain will not be re-hooked.  Sure, you can put policies into place and issue disciplinary action to your workers.  You can post signs and hold training early and often.  But, in the end, you are creating a lot of unnecessary work for yourself.  If you had a self-closing safety gate that automatically closed behind the worker, your energy could be better expended elsewhere, in places where there might not be as easy a solution.  Of course, a person could still find ways to bypass this automatic feature, by wedging the gate open for instance, but they would have to go out of their way to do that and if they couldn’t be bothered to hook a chain, odds are they’re not going to be bothered to find ways to bypass a gate.  But, let’s say they do bypass it.  Where they might be able to argue that hooking the chain was just something they forgot to do, bypassing of the safety gate would be a clearly intentional act, making disciplinary action a much more clear-cut matter.

Lifelines are fantastic.  They certainly help provide fall protection in many situations where it would be difficult to find any other way.  Still, they lend themselves to human failure.  In order to use a lifeline, the worker must be properly trained in fall protection, understand it, and use it perfectly.  And that’s not even counting the human errors that could have been made during the design and installation of the system.  Railings, on the other hand, eliminate much of that human error.  Besides the fact that they actually prevent falls rather than arrest a fall that has already occurred (making them the clear winner, where possible, regardless), pretty much everybody knows how to use a railing.  Don’t walk into the rail.  Don’t run into the rail.  Don’t jump the rail. Don’t climb the rail.  Pretty simple.  With the lifeline, again – assuming it’s designed and installed properly, you have to worry about whether or not the user is wearing their harness properly.  Did he clip his snaphook where he was supposed to?  Did he clip his snaphook at all?  Are they overloading the line?  Are they taking chances they shouldn’t be taking?  Are they doing any work that can be affecting the integrity of the line?  Railings eliminate much of that headache.

If areas are dangerous, don’t trust your employees will understand that.  Even if they understand it, don’t trust they’ll always use their best judgment.  Physically restrict access to dangerous work areas where possible by locking doors and gates.  Place signs.  Where necessary, place a watch outside the dangerous area to ensure nobody will enter, just as you would a confined space.  Why wouldn’t you use the same thought process if you’re working in an electrical room with live equipment, for example, just because the regulations don’t necessarily require you to do so?  Don’t just throw up a piece of caution tape.  It often gets seen as just something to move out of the way before passing through.  Use red danger tape for more impact, but also, use lots of it (whether ultimately deciding on Caution or Danger).  When you force people to have to think about what they’re doing and go out of their way to bypass the precautions put in place, they will think twice about it.

Lock-Out is specifically designed to take human mistakes out of the equation when it comes to people being hurt in the workplace.  In fact, its very definition says so when it states that Lock-Out / Tag-Out is intended to protect workers who could be harmed by the unexpected energization or startup of machines or equipment.  Why would it be unexpected?  Because somebody did something they weren’t supposed to do, most likely.  That could be somebody physically starting the equipment or it could be the person working on the equipment forgetting to notify people, or expecting they could accomplish something before the power came on, etc.  By having a Lock-Out / Tag-Out program, assuming it is properly followed, you make it nearly impossible for an employee to be injured by unexpected startup.  Sure, somebody could go grab a pair of bolt-cutters and go cut off a lock, but you’d hope that the rest of your staff would be well enough trained to understand that this is NOT something you do and that there are very severe repercussions for bypassing somebody else’s lock.


Also, notice that I said that Lock-Out is specifically designed to eliminate human error as much as possible.  Tag-Out is, as well, when used in an actual Lock-Out / Tag-Out situation, but in the few instances where it is used as the only protection (for example, in a nuclear plant, there are often procedures that no equipment may be physically locked at any time), there is still a great deal of room for human error.


Until we reach that dystopian future where our world is run by robots and humans just sit around getting fat, we have to recognize that we need humans to run our businesses.  And, as wonderful a resource as those people are, the possibility for human error comes with them.  There is no way to completely human-proof your programs because somebody who wants to violate it will always find a way, but you need to do everything you can to reduce the potential for human error or to reduce the severity of the impact a human error might have on your employees and production.