Harness Saves the Day - Or Does it? 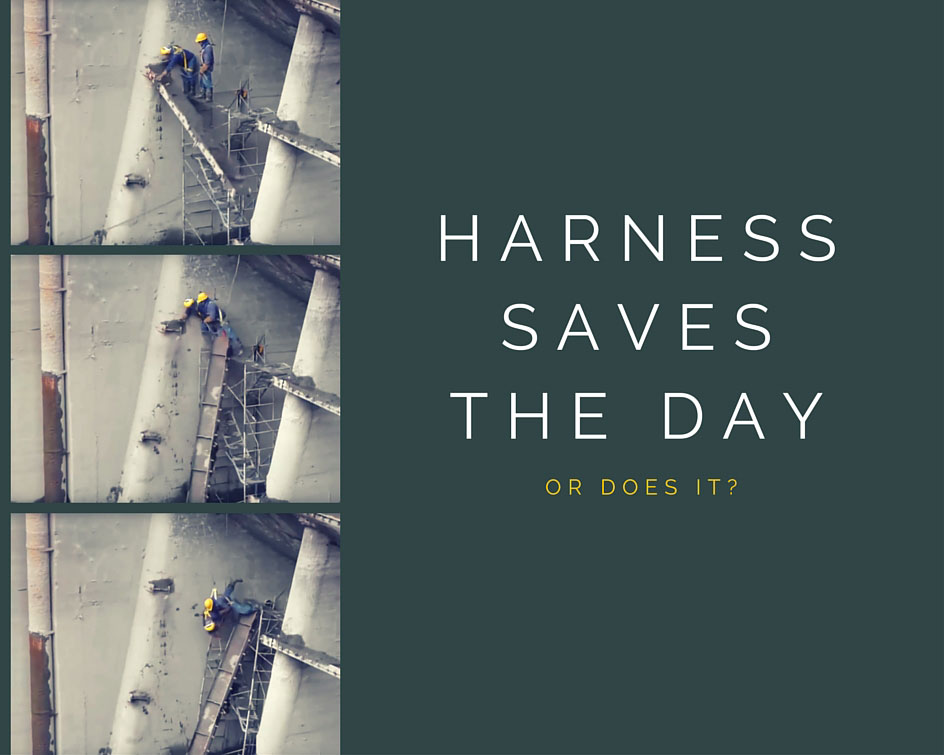 Appear to.  I say this because, on the surface, the lives and well-being of workers are preserved.  There is no discrediting this.  But, sometimes, that isn’t the whole story.  Let’s take the following video for example:


Here we have a couple of workers who have climbed a scaffold in order to cut away a piece of steel.  Steel falls, hits the scaffold and knocks it over, but the men are saved by their harnesses.  And there was much rejoicing.

But wait, let’s take a closer look at this video from start to finish, because I have some serious concerns.

1. How well was this planned?

Okay, sure, we’ve got harnesses, lanyards, and an anchor point that apparently worked, but why did this piece of steel strike the scaffold in the first place?  In the video, you can clearly see a tag line of sorts tied around the piece of steel they are cutting – all the way to the right.  When the piece falls, there is nothing on the left to help pull that steel away from the scaffold.  The right side is already cut, so when the side they are currently cutting gets weak enough, the beam falls away.  The tied side stays away from the scaffold as intended, but in doing so, causes the left side to crash back into the scaffolding.  If somebody had taken the time to look at the situation, this should have been readily apparent.

I have to make some guesses about scaffold dimensions here because I obviously can’t measure it, but OSHA regulations say that any scaffold 4x higher than the least base dimension must be secured to the structure.  Judging from the height of the men, I’m going to say those are 6’ high sections of scaffold, 3 bays high – totaling 18’.  I’m going to assume the least base dimension is 5’ for arguments sake, front to back.  So, in order to be in compliance, if the scaffold was 20’ or more in height they would be required to have it secured to the structure.  Fine, they have not reached that point so they are compliant.

But look at the work they’re doing.  Wouldn’t it be prudent, knowing you will be dropping steel to the ground, to take as many safety precautions as possible?  Why NOT secure the scaffold just in case something like this were to happen?  In the safety world, we cannot base our preparations only on those things that are definitely going to happen, or even those things that are likely to happen, but on the actual worst case scenario.

Now, I do understand that this is a steel beam with a lot of weight.  Perhaps if the scaffold was secured to the structure it still would have been torn from its anchors or, if the anchors held, it might have broken into pieces.  Who knows?  But what we do know, is that without it, the scaffold was quickly and easily toppled.

Ahhh.  Now, here is the one that concerns me the most.  What now?  Judging by the gentlemen that enter the frame at the end of the video, there isn’t much of a rescue plan in place.  While everybody is straining their arms patting themselves on the back at how well the personal fall arrest systems worked (and they did, again, I am not taking away from that), these workers could start to experience suspension trauma at any moment (as written about here).  Suspension trauma can occur in in a matter of minutes and, while everybody was happy to see that nobody fell, the suspended workers are in the process of losing a leg – or even their life.  Now, in this particular video, the scaffold doesn’t go too far away.  Maybe the workers will be able to right themselves so they can wait to be rescued without danger, but maybe they won’t be able to.  Maybe in another minute, that scaffold falls away completely.  There is no way to know.  In other scenarios, that scaffold could have crumbled to the ground or the suspended worker could have been knocked unconscious, rendering him incapable of helping himself in any way.  Rescue plans are of the utmost importance.  Just saying, “We will call 911” doesn’t always resolve the problem.  They may not be able to get to you or may not have the equipment and training needed to perform a rescue.  A great way to rescue the workers in this situation would be via a boom lift, but I’m going to assume that if they had a boom lift present they would have cut the steel from it (since the body of the machine at ground level could have been kept far away from the falling steel).  If no lift is available, these people are left to devise a rescue plan in a matter of minutes while the workers’ lives literally hang in the balance.  No pressure.

Now, I don’t want to look at just the bad.  Again, the men seem to be properly wearing their harnesses.  The lanyards quickly arrest the fall, keeping the workers from experiencing more force to their body than the allowable MAF and they seem to have chosen a suitable anchor point that didn’t come crashing down around their heads.  This is all good, but if we only look at the good, we learn nothing.  Plan ahead, determine if the OSHA regulations (a bare minimum) are enough to protect your workers, and be ready to rescue them in the worst case scenario because, as is evident by this video, sometimes the worst case scenario does happen.