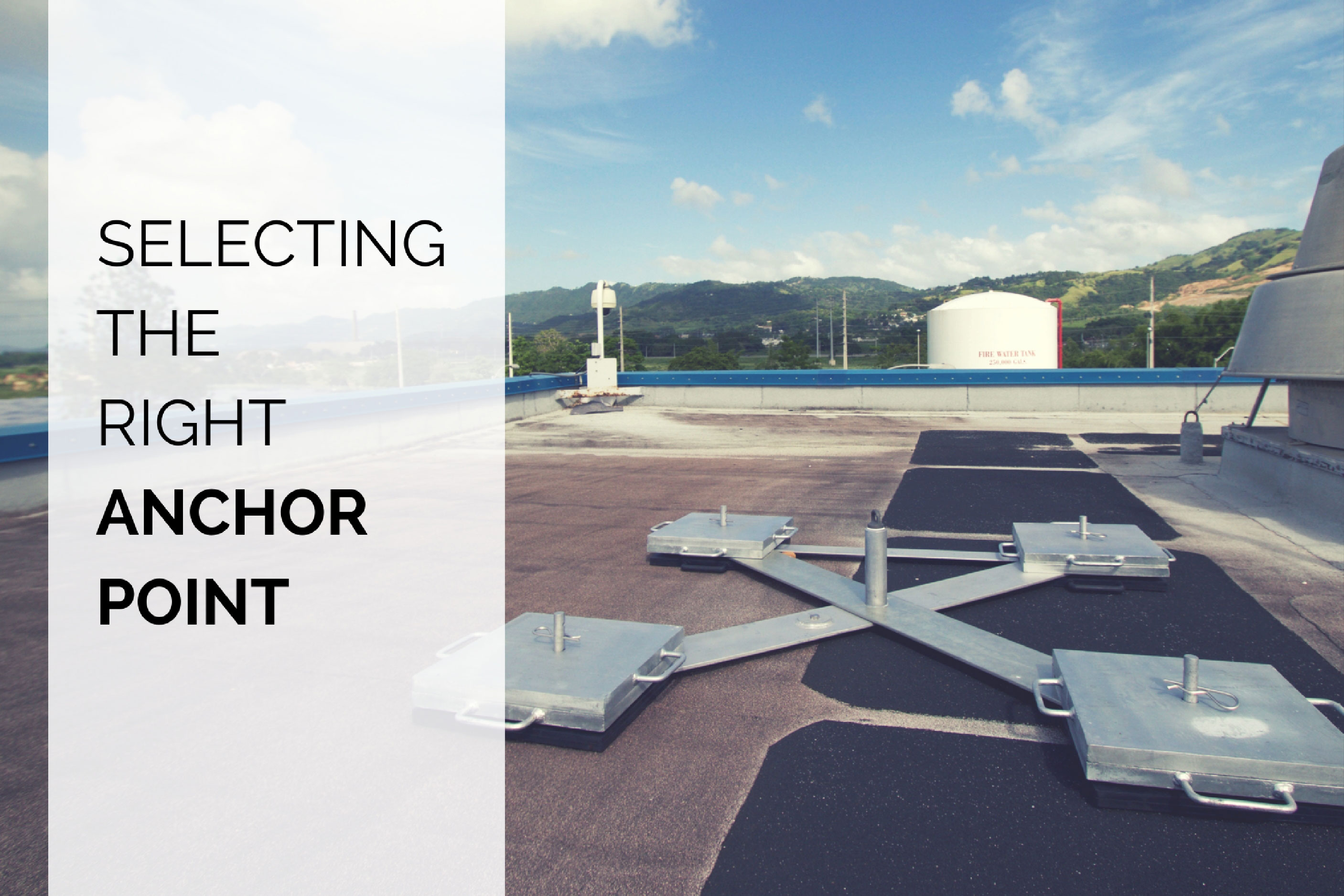 Anchor point selection is not nearly as simple as finding the nearest solid-looking object to which you can clip your lanyard.  Understanding the forces which roof anchor points are required to withstand, the type of anchor point your lanyard can safely connect to, and the work that you are going to need to perform are all critical components of proper anchor point selection.  Too many people take this for granted and feel that just being “tied-off” to something is safe enough. This couldn’t be further from the truth.  Accidents abound where people are tied off to insufficient anchor points or what should have been sufficient anchor points were used, but because of improper usage, they failed.  Your workforce needs to understand what a proper anchor point is and, should one not be readily available, they need such an anchor point provided to them.

Shy of a good ol’ structural I-Beam, it’s going to be hard to make a case for making a field decision to use any other structural member as an anchor point.  In order for something to qualify, it must be able to withstand 5000 lbs. of force per person attached or a safety factor of 2 (meaning 2x the forces that would be applied to it in a fall).  Now, here’s a little test.  Grab any person in the field and ask them what the criteria for an anchor point is.  Those who don’t know can’t possibly make a decision on which part of the structure to choose.  Still, if you have anybody remaining that did know the criteria, ask which parts of the structure meet these criteria.  Many are going to say “I don’t know.”  Eliminate them as well, because they can’t select an anchor point by their own admission.  If somebody gives you an answer other than “I don’t know,” ask them how they know what they selected meets the criteria. If they can’t explain, then they can’t select a roof anchor point either.  If they can (or attempt to), ask them if they’d be willing to sign a piece of paper stating that the anchor point is sufficient or provide data that supports their selection.


The point I’m trying to make is that, other than an engineer who has stopped to review some specs and perform some calculations, most people aren’t going to know what can or can’t meet the requirements of an anchor point and, even if they could, they’re not going to be able to provide the proof you need to make the anchor point a valid option. I-Beams are pretty much your only randomly selected option. Like all other options, the connection still needs to be approved by an engineer and you’re going to need to make sure you have the proper equipment with which your workers will connect. Whether a beam clamp, a beam wrap, or some other designed system, every last piece needs to be in place.  It only takes the failure of one component for the whole system to fail.

One of the best things to do is to purchase an engineered system.  There are a variety of different kinds: horizontal lifelines, mobile anchor points, and permanently installed engineered anchor points to name a few.  Each comes with their own pros and cons.

Horizontal Lifelines are fantastic once they’re in place.  The design phase could be a little time-consuming and the systems could be pricey, but they allow your workers freedom of movement, can be custom designed to just about any configuration, and can be installed to minimize or eliminate lanyards on the working surface (trip hazards).  However, they aren’t just quickly thrown in place and they shouldn’t be installed by somebody who is not extensively trained in doing so (luckily many suppliers will offer this service).  Horizontal Lifelines take time – from design, to installation, to being trained in their use, this is something that needs to be thought out ahead of time and is probably more realistic for long term projects or permanent installations. For instance, a roofer going to a rooftop to perform a quick one-day patch probably won’t be erecting a horizontal lifeline, but if there is going to be frequent maintenance on rooftop air-handling units, then maybe a lifeline is the way to go.

Portable anchor points are another option.  There are a number of different types, from counterweighted systems like Weightanka to rolling roofing carts, portable anchor points can give you an engineered solution to help you with those quick or intermittent jobs at heights.  These systems are designed in such a way that they do not require rooftop penetration and can often be broken down into components that can be moved around by one or two people.  Set up is quick, so, simply drop the parts, assemble, connect to it and you’re ready to go.  Other options exist for residential roofers and similar trades that can nail directly into the roof sheeting.  For almost any application, a portable anchor can be found.

Permanent engineered anchor points are a viable solution as well.  Unlike their portable counterparts, these systems are designed to penetrate the roof and attach to structural steel so that once they are installed they are left in place. These are good for situations in which you know exactly where your work is going to take place, because workers are going to be restricted to a set radius around this anchor point.  For work that will take place in various locations outside this radius, multiple anchor points or a Horizontal Lifeline will need to be installed.  If you are pouring concrete, you may want to consider straps that get poured into the concrete that then get cut off when the work is finished.

As always, when it comes to fall protection, nothing works if your employees aren’t properly trained.  If you are using a mobile anchor point, workers will need to fully understand how it works, how it is assembled, how many people can use it at once, and how they should properly tie off to it.  Just handing workers equipment without teaching them how to use it is not only a violation of OSHA standards, but it’s outright dangerous.  Take the time to assure your workers are properly educated.


In the end, anchor point selection is not a simple decision that can be made “on the fly” in the field.  Like all fall protection solutions, anchor point selection should be thought about in the planning stages of the work.  If not, you can almost guarantee that workers will be working unprotected or insufficiently protected.  Don’t leave the lives of your employees to chance.  Plan for their safety.