Anchor Points vs. Horizontal Lifelines: When Should I Use Them? 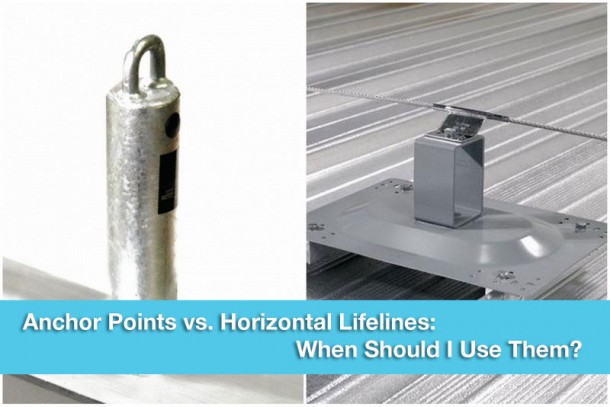 Anchor points and horizontal lifelines are two ways to achieve the same purpose: protecting your employees from a fall. Each method has its pros and cons, as well as appropriate and inappropriate times for use. Perhaps, though, the most important question to ask is: should you use them at all? Anchor points and horizontal lifelines are part of Personal Fall Arrest Systems (PFAS) which means that in order for them to come into use, a fall must occur. Even with properly installed and used systems, injuries could still occur. The best solution may be neither of these, in favor of a rail system or engineering the hazard out altogether. Personal Fall Arrest Systems require constant inspections, maintenance, and training. Rails take much less effort once installed and do not allow your employee to fall in the first place.

However, let’s assume you’ve considered rails already and have determined that they are infeasible. How do you decide between an anchor point and a horizontal lifeline? In order to determine which will be best for you, you need to fully understand your situation. Ask yourself questions such as, how many people will be working at heights? What kind of travel will need to be allowed during the work? Who is going to install whichever product you eventually choose? It is possible that by answering these few simple questions, which product to use will be crystal clear.

How Many People Are On The System?

The number of people working at heights is going to be the easiest way to determine which system you’re going to want to use. Typically, an anchor point is going to, by design, be able to support fewer people (most often, one). If you’ve only got one person working, then maybe installing a permanent anchor point or assembling a temporary one is the way to go. However, to protect an entire crew, you would need to install multiple anchor points. This type of setup, though, is limiting. Each employee is bound to their one work location and, let’s face it, that’s just not how work goes. If multiple employees are working, they will most likely need to move around to help co-workers, bring supplies, or just move on to the next section of work. Your best solution in this case is a horizontal lifeline that would allow much more freedom of movement while still protecting your employees.

Where Do They Have To Work?

If your employees need to reach every last corner of a surface, installing enough anchor points to achieve this can be a challenge. Take a look at this diagram. It assumes you have a full 360 degree working radius around your anchor point:

If the above blue rectangle represents your rectangular roof (or other working surface), each blue dot represents an anchor point (in this case 7 anchor points), and each yellow circle is the working radius around the anchor point, notice how much space is unable to be reached and how the workable space can only be reached by the person attached to that particular anchor point. Could you install multiple points and get creative with their layout to be able to cover the entire surface and overlap work areas? Sure, but it’s going to take planning and creativity. Still, whatever you decide on as your final setup is what you’re bound to. If the configuration doesn’t work as planned, will you just keep adding anchor points until you get it right? Of course, there are products that help with this, such as a mobile roofing cart, which can be fairly easily moved from location to location, but more complex systems or permanent anchor points may not afford you the luxury of relocation.

Most likely, if you have a crew of people working instead of just one or two employees, you will want to consider a horizontal lifeline. If designed for the proper forces as required by OSHA’s 29 CFR Subpart M, it can hold the number of employees you need it to hold (the oft-quoted 5000 lbs per worker attached is the regulation most go by, but it is important to note that OSHA states in their regulations that what is actually required is a safety factor of two. An engineer could design or approve an anchor point for you that did not meet the 5000 lb requirement if calculations showed that the anchor point would support twice the maximum forces in the event of a fall).

With the same roof, total coverage could be achieved by running a horizontal lifeline around the perimeter of the roof or straight across the middle. The ends of the line could potentially be terminated far enough back so that even workers at the very ends could not go over the edge of the roof in a way that would produce swing (or possibly not even go over the edge of the roof at all). In the below diagrams, since we’re already assuming total roof coverage, the yellow line represents your horizontal lifeline:

A horizontal lifeline would require multiple anchor points as well, but once in place, your workers could travel the entire length of the roof.

What About Cost And Installation?

One cost to consider would be your lanyards. If you already have standard single leg lanyards but choose to go with a horizontal lifeline, there is a chance you’ll have to replace them with double leg lanyards. As you travel along a horizontal lifeline, you will encounter the different stanchions – or anchorage points – to which the line is attached. Now, while there are some stanchions out there designed for continuous, uninterrupted travel, the vast majority of systems will require you to hook your second lanyard leg to the line on the far side of the stanchion before removing your lanyard from the side you were just attached to.

Also, you may find that properly setting up a mobile anchor point is much simpler than setting up a horizontal lifeline (note that not just anybody can throw together a horizontal lifeline – there are many considerations to ensure that it is strong enough, sturdy enough, and compliant; using a pre-engineered system helps take some of the burden off you, but proper setup is still critical). You may find the cost for one to be more or less prohibitive than the other. Either way, you still need to know if you can use one of the solutions before budget and ease of use are considered.

With a little thought and effort, you are probably able to figure out which is right for you – anchor or lifeline, permanent or temporary. Either way, you’re well on your way to keeping your workers safe.