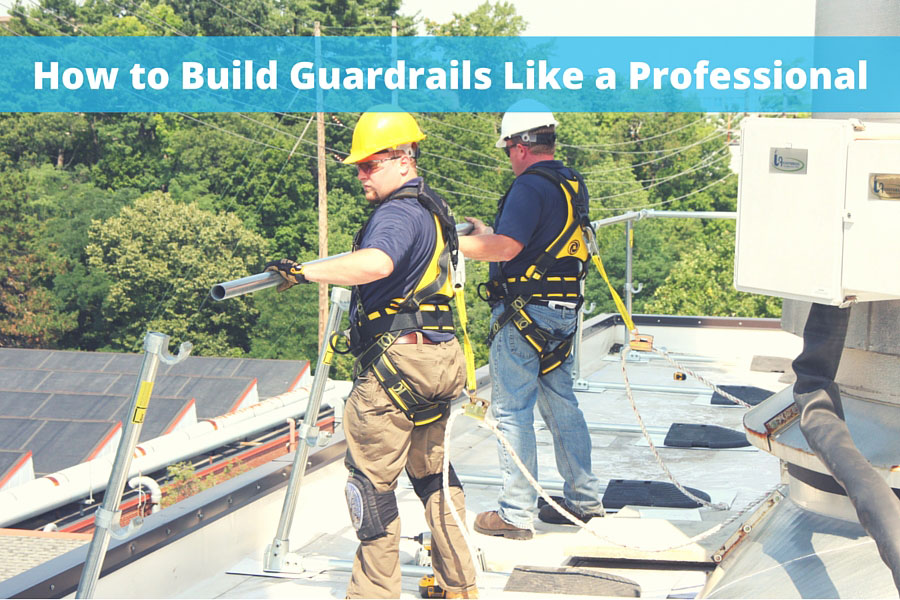 Let’s be honest, the best way to build safety railing like a professional is to be a professional, but that’s not always possible.  Lucky for those who aren’t, there are some very strict rules regarding safety rail construction that don’t leave much to chance.  Don’t get me wrong, I’m not suggesting you let somebody build your rails simply because they know which end of the hammer to hold and which to hit with, but somebody who is skilled enough to build a good rail doesn’t necessarily need to be a professional carpenter.

First, you’re looking for some type of sturdy material.  Many of the dimensions we’ll discuss will apply regardless of whether you’re building your railing from wood, metal piping, wire rope, or some other suitable material (however, 29 CFR 1910.23(e) specifies that wood rails, for the most part, must be made up of at least 2x4s with posts no more than 6’ on center, pipe rails must be at least 1.5” in diameter with posts no more than 8’ on center, and structural steel rails must have posts that are 2”x2”x3/8” angles and no more than 8’ on center).  The key is that the rail must support at least 200 lbs. of force in any direction at any point on the top rail (construction scenarios read a little differently – rails must withstand 200 lbs of force in a downward or outward direction within 2 inches of the top edge, anywhere along the entire length of the railing).  If you’re thinking that that doesn’t sound like much, you’re right.  Remember that a fall protection anchor must support 5000 lbs. of force per person attached, yet here we’re discussing 200 lbs.  That’s because a rail is not intended to arrest the weight of a grown adult in a freefall, it’s simply there to keep you from walking too far and ending up on the concrete dozens of feet below because you weren’t paying attention.  Some rails that are completely compliant would break in a heartbeat if a worker was pushed or thrown into them during a fight or horseplay (a good reason, if you needed one, to ensure that neither of these things is occurring on your site).

Now that you’ve got your material, you need to know where to place it.  Keep in mind that, at minimum, your rails are going to need posts, a mid-rail, and a top rail.  We already know how far apart your posts need to be and how much force they need to withstand, but what about the horizontal rails?  In non-construction settings, the OSHA regulations indicate that you are aiming for the top rail to be 42” nominal from the walking/working surface.  They specify this a bit more in construction by stating that you have a 3” leeway in either direction, so your top rail can be anywhere from 39” to 45” and be in compliance.   You also want to make sure the material you are using for your top rail is smooth - so as not to cause splinters, lacerations, or other injury for somebody placing their hand on it – and does not stick out over the end posts unless having these rails stick out does not pose a projection hazard.  The 42” designation for top rail height might then lead you to believe that your mid-rail needs to be 21” off the walking/working surface.  This may be true, if you’ve managed to situate your top rail right at 42”.  The standard, in both general industry and construction calls for you to place the mid-rail halfway between the walking/working surface and the top rail.

Now that you’ve got your top rail, mid-rail and posts set up, you’re done, right?  Wrong.  If there is any hazard of materials being kicked off the walking/working surface onto people below, you must install a toeboard.  The toeboard must be 4” high and securely fastened into place (they do allow for a maximum of ¼” off the walking/working surface).  Keep in mind that the toeboard does not need to be made of the same material as the rest of your rail.  Any solid material with the proper dimensions or that has openings  smaller than 1” in their greatest dimension can be used for a toeboard.  In addition, if you are going to have material stacked in such a way that it could fall over the standard toeboard, then you are responsible to protect that opening.  This can be accomplished with mesh, paneling, or some other material filling the gap between toeboard and mid-rail (or top rail if necessary).

It may sound like a lot if you’re not the person qualified to build these railings, but somebody who is will see that it’s just ensuring the correct materials and putting them into place.  Make sure to check 29 CFR 1910.23 for any further requirements in general industry and 29 CFR 1926.502 if you’re building rails for construction.    Your situation could require something different than we mentioned here.  And, if all else fails and you don’t feel you can build your rails like a professional, you can still go purchase pre-fabricated rails and have them professionally installed.  It could end up being just a bit easier!