What Fall Protection is Required When Working on a Scaffold 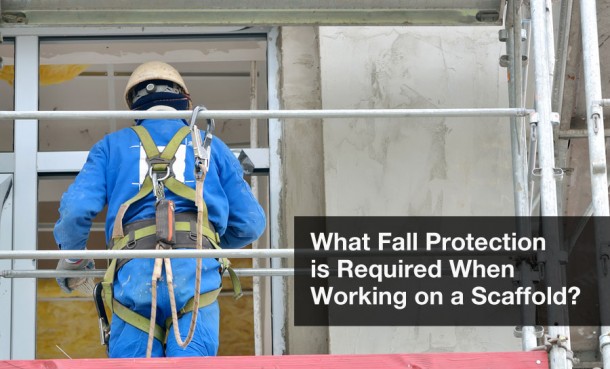 These terms refer to two different types of OSHA regulations.

A horizontal standard is a broad, general standard, like 29 CFR 1926 Subpart M: Fall Protection. This standard is your basis for fall protection, it's general and applies to any industry. It is where you begin.

Let's dig a little deeper and look at a particular application.

If you said 10 feet, that's right! That is because the vertical standard overrides the horizontal standard.

Why does OSHA allow for falls of up to 10 feet on scaffolding when most other situations require protection at 6 feet? Do we fall more gently from scaffolding than we do from any other elevated surface? Of course not. The simplest answer is that one section of scaffolding is often more than 6 feet tall. The regulation in Subpart M, the horizontal, would require a worker on a single scaffold bay to have fall protection. You might ask why it’s okay to have no fall protection on a single scaffold bay? Well, it was deemed to be an undue burden on masons and other trade professions that frequently use scaffolding, so the height restriction was raised.

Now, we understand when fall protection is required, but how do we achieve compliance once we pass the ten-foot mark?

Like most other fall hazards, you’re looking at one of two solutions: roof guardrails or tying-off with an anchor point. Most companies opt for safety railing because they’re easy to install and are a form of passive protection, or protection that requires no interaction to work. The problem is, many don’t get the rails right. Scaffolding rules are complex, which is why OSHA requires they be erected under the supervision of a Competent Person (somebody with both the knowledge to recognize a hazard and the authority to correct it).

For something like Baker’s scaffold, it’s simple. The rails are a part of the system and pop easily into place. Suspended scaffolding is often just as simple (though we’ll talk specifically about fall protection requirements in suspended scaffolding in a moment). System scaffolding set up by a professional scaffold company (or properly set up by your own personnel) includes the necessary rails as well. Masonry scaffolding, on the other hand, is often assembled incorrectly.

Masonry scaffolding is made up of components – uprights, outriggers, cross braces, base plates. What is not included is mudsills, planks, or railings. Often, providing these pieces is left up to the company erecting the scaffold. Rails usually consist of 2 x 4s wired to the upright. These are oftentimes not even installed or not completed properly, making them unsafe.

One of the most frequently cited issues with railings is that the ends of scaffolding are left unprotected. Companies will spend time to ensure the length of the scaffold is protected behind the workers, but forget to enclose the width of the scaffold, front to back on each end, leaving a fall hazard unprotected

The other part that’s missed is where cross-braces exist. People assume they are protected by “guardrails”. This is only partially the case. The regulations state [29 CFR 1926.451(g)(4)(xv)] that cross-bracing can only be a top rail OR a mid-rail, depending on where the two braces cross. If they cross between 20 and 30 inches from the walking surface, they can serve as a mid-rail. If they cross between 38 and 48 inches, they can serve as a top rail. NEVER both (as it would be impossible for the two straight cross braces to cross in more than one location).

Since a window washer’s scaffold is completely enclosed by rails, one would think that that is all the fall protection needed. However, this is not the case. 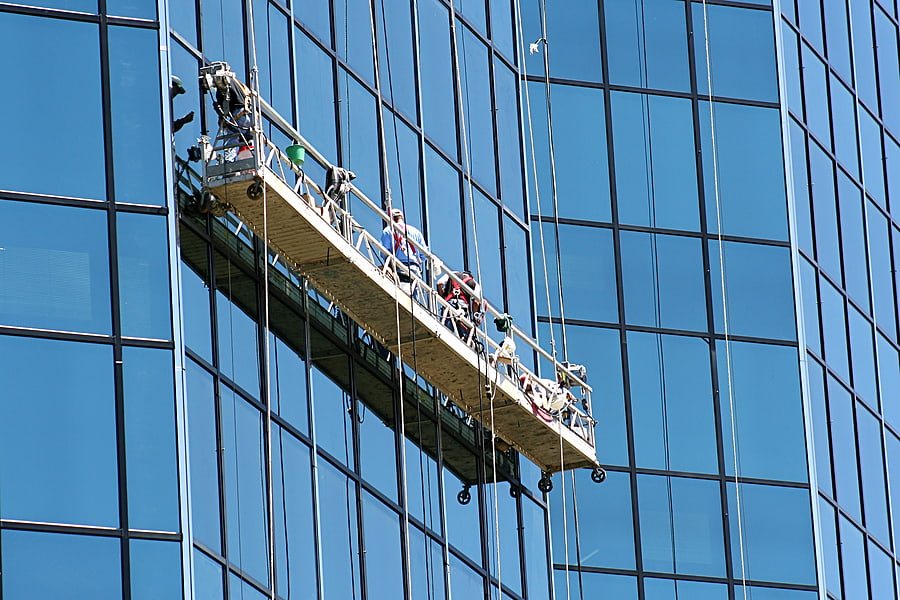 In four-point suspended scaffolding, the scaffold itself may only be used as anchor appoints if approved by the manufacturer. This is important since many scaffold systems could collapse due to forces of a fall.

All of this is just a basic overview. In the regulations, there are allowances for horizontal lifelines in suspended scaffolds, requirements for how vertical lifelines should and should not be attached, and forces that rails must be able to withstand. Properly setting up planking (length of planks, proper overlapping, etc.), as well as ensuring your planking is capable of supporting four times the weight intended to be placed on it, would also be considered fall protection.

There is a reason why scaffolding always makes OSHA’s top ten list of most frequently cited violations: the requirements are complex. This is why it’s vital to have a Competent Person properly trained and experienced with the types of scaffolding you use. Not only is it required for you to have one, but as you can probably surmise from this overview, failing to have one could be a fatal mistake.