The Most Common Safety Excuses 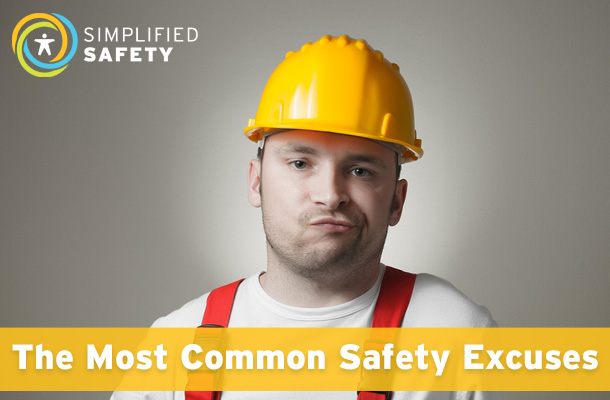 If you’ve been a safety professional for any amount of time, you could probably write a book based on the excuses you’ve heard regarding why a worker or a company failed to adhere to safety rules and regulations. The excuses range from ignorant to absurd – from entertaining to frightening – yet, day after day, we continue to hear them.

What’s worse is that many companies or workers actually believe that these excuses aren’t excuses at all, but rather are valid reasons for doing things the way they do them. Part of our job, as safety professionals, is to get these people to understand why their excuse is just that – an excuse – and how dangerous their behaviors really are. So what can you say, when faced with this situation, to help the offender know that he or she is just making excuses?

I’ve Been Doing it This Way for XX Years

Ok, raise your hand if you haven’t heard this one. Nobody? Good. That’s what I thought. Old-Schoolers are resistant to change. If they weren’t, they wouldn’t be called Old Schoolers. The Old Schooler is the guy that tells you that what he’s doing is just a-ok because he’s been doing it that way forever and he’s never gotten hurt. Well, that may be true. Maybe he hasn’t gotten hurt, but if there’s a regulation for it, then there’s a really good chance somebody has gotten hurt doing it that way. This is an example of anecdotal evidence – a situation where a person’s personal or observed experiences override actual facts and statistics.

For a man walking the steel 40’ in the air without any fall protection, the fact that he’s never died before from falling tells him it’s okay to continue to work that way when, to the rest of the sane world, it is obvious that it is not okay. All it takes is that one accident, that one loss of balance, that one unexpected condition to make this situation tragic.  And for those who think their balance is infallible, what if their blood sugar drops or spikes and they get dizzy? What if they crouch or sit to do something and stand up too fast? Some things are just out of your control.

When I first got into the industry, I had a particularly difficult superintendent on a job who just did not want to change the way something was being done in order to comply with OSHA regulations. One day we both happened to be at the corporate office and got in a heated discussion over this. At that moment, the Executive VP for his division walked by and asked what was going on. I explained the situation and the superintendent immediately followed with, “I’ve been doing it this way for twenty years!” At that point, the VP gave one of the best retorts to that line I’ve heard:  “Then it’s about time you learned something.”

Now, I would not recommend that you, as the safety professional, respond with that. It can only sour your relationship with the very people you need to work with you, but coming from his boss, it was exactly what was needed. As a safety professional, it’s best to point out to this difficult player that every single person that has ever died on the job could say, prior to their accident, that it had never happened to them before. Not one of them had been killed on the job prior to being killed on the job. But for each, unfortunately, there was that first – and last – time. Your job is to help them prevent that first – and last –time from ever occurring.

Did it? I never buy into this one. If something is dangerous or risky, then it was dangerous or risky when they decided to do it in the first place. This statement says to me that the employee never stopped to think about what they were about to do. As safety professionals, one of the biggest tools in our toolkit is planning.

We must find ways to make sure the workforce plans their work even when we’re not looking. Whether this is through formal daily pre-work planning meetings, pre-work JSA reviews, or something more informal, one look at what an employee is doing will tell you whether or not they spent any time planning. And rest assured, it never seemed like a good idea.

These? These say to me that the worker in question doesn’t take his or her own safety seriously. This is a problem. Somebody who really means one of these things is either saying, “When push comes to shove, safety is less important than finishing the job,” or “My safety isn’t important enough to worry about.” Both of these are unacceptable. If a worker has this attitude, then they have not been properly educated on the true risks of their job. They need intervention in the form of training and they need it quickly.

This person can be a challenge. Sometimes they truly do not care if they end up getting hurt, but most often just don’t believe anything will happen to them. One way I’ve been successful in getting through to these types of people is to show them how their actions are a hazard not just to themselves, but to others. Often, a person may not be too concerned with his own safety, but would never want to be responsible for getting somebody else hurt. The trick in addressing these attitudes and excuses is finding the approach that will work.

When you receive these excuses, the problem is two-fold. If the excuse is accurate, it means you have a culture problem within your organization. Your supervision is putting your workforce in danger, intentionally or not. First, your challenge is to get the employee to understand that they have a say in their own safety. They need a channel to speak up without consequence if they feel they are being forced into a dangerous situation. And, most importantly, they need to understand what a dangerous situation is.

If they can’t recognize a hazard, they can’t correct it, or protest the instruction they’re being given. After that, you have the challenge of addressing your organization’s culture. You need to ensure you have top-management buy-in so that you can begin working on the company supervision. Supervisors need to hear it from their bosses that safety compliance is not optional and that nothing – not budget, not schedule, not anything, is an acceptable reason for putting an employee’s life at risk.

You Caught Me the ONE Time I Did This

This one cracks me up. Either I have the most impeccable timing on the planet, or many, many…many…workers have lied to me over the years. I can’t count the number of times I have caught a person the one time they weren’t wearing their safety glasses, or the one time they forgot a GFCI, or the one time they decided to straddle an A-Frame ladder, or the one time…well, you get the picture.  The fact of the matter is, if you catch somebody during a spot inspection, odds are they’re doing the very same thing when you’re not around.

Take this as an opportunity to correct a behavior and identify re-training needs. Also, it’s a good opportunity to remind the workers you’ve got your eye on them. If you’ve observed them doing the same thing before, let them know that. Personally, I make light of the excuse with them in a way that makes them realize just how ridiculous the claim is without my coming out and saying it’s ridiculous. By the time our conversation is done, they know I didn’t believe a word of it. If they think they’ve pulled the wool over your eyes once, it will encourage them to try to do it again. Sometimes we need to remind them that we’re not as stupid as they think we are.

It Was Only Going to Be a Second

This one is frustrating because it shows there is no concept of how accidents occur. “It only takes a second,” is the quick and easy response to this excuse. In my experience, though, it doesn’t take much convincing to get through to this person. The person who uses the “only for a second” excuse tends to know it’s a flimsy excuse and just felt they had to say something because they’d been caught red-handed. Take a moment to talk to this person and let them tell you what the better way to handle the situation would have been. Most likely, they already know.

Excuses occur every day in every aspect of life, but as a safety professional we tend to hear them constantly. What’s important is that we’re able to counter them – to show employees that what they were doing is dangerous. Being able to do that hinges on our ability to communicate. We must be able to determine approaches that are effective for each worker (and those approaches could be different for each worker).

We must be able to speak in a way that they can comprehend without feeling like they’re being condescended to. We need to know what we’re talking about, so that information conveyed to our workers is accurate information. Workers also need to be able to trust us. They need to believe that we have their best interests in mind. If that’s the case, they’ll be more open to us and more willing to discuss what’s wrong or unsafe. Communication and trust. With them, perhaps we can move beyond the excuses.