Three Safety Cultures – Which One Are You In? 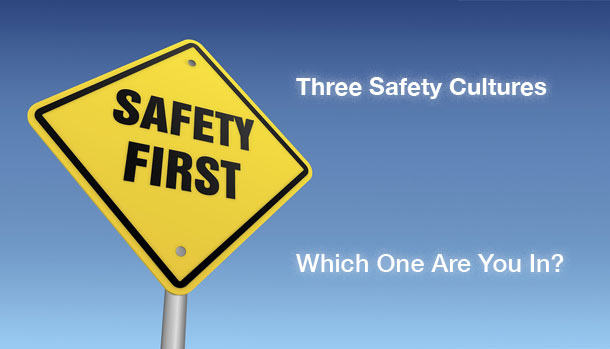 Whenever I deliver a training class to a group of workers for whom I’m also serving as a safety consultant, I explain that there are two things I need to do: 1) Keep them safe and 2) Keep the company compliant.

The trick is that if I’m achieving the first one, I am almost always achieving the second one by default.  This is a good place to begin because some workers are simply distrustful of safety professionals, whether because of a bad experience in the past or because they feel that safety professionals exist for no other reason than to save the company some money.  It is important that they understand that their well-being comes first.

This has been the mantra of safety professionals and safety-oriented organizations for years now, hasn’t it?  But, let’s be honest.  It’s idealistic and often not the least bit realistic.  We’d love to believe that when it comes to safety, all else can be set aside, but the reality of the situation is that companies still need to be profitable.  No profit, no company.  No company, no work.  No work, no jobs.  Yet, some safety professionals will still come in with the attitude of, “I don’t want to hear about budgets or schedules, this is what needs to be done.”

The fact of the matter is that there are often multiple ways to keep people safe and, as safety professionals, we should be looking to find ways that achieve safety, achieve compliance, don’t break the bank, don’t compromise the quality of the work, and don’t create additional time expenditures that are going to throw the project schedule off-track.  I’m not suggesting somebody should compromise the safety and well-being of the workers, but they should compromise on the method that is agreed upon, should compromise be needed.

For instance, perhaps a safety professional does not trust his roofers to tie-off properly to the fall protection carts on the roof.  In this particular professional’s mind, the only fully safe way to work on a roof is to make sure the entire roof – or at least the work area – is enclosed in railings.  Maybe the safety professional is right.   Rails really do provide protection for everyone and, once installed, they’re hard to screw up.  However, does the contractor own these rails?  If not, that could be a huge expenditure not figured into their budget while there is a viable means of safety and compliance already available.  Are there aspects of the work that cannot be done with rails in place?  If so, it kind of defeats the purpose of using the rails instead of the carts in the first place. Meanwhile, putting the rails up, taking them down, and putting them up again could cost unnecessary time and manpower.  Sure, maybe sticking with the carts is going to involve some re-training and additional oversight on the roof, but it can be done.  We need to realize that we are working as a team.  The more we do that, the more cooperation we get.

At some point or other, you’ve most likely worked with a safety professional who only did things “By the Book”.  Maybe that guy is you…or used to be.  While being a stickler for the rules isn’t necessarily a bad thing – especially when you’re dealing with people’s lives – what makes it a problem is that the rules themselves are fairly vague.  If they weren’t, OSHA wouldn’t need to constantly publish Letters of Interpretation. Sometimes the wording of a regulation just doesn’t lay out what you wish it would lay out, other times new technology comes along that makes a regulation obsolete.  Either way, trying to do things “By the Book” may not be the safest way to go.  And, due to the ambiguities in the regulatory text, when somebody states that this one way is the way to do something, it raises a red flag for me.  How well does this person know the regulations or, more importantly, the intent behind the regulations?

Some regulations still haven’t been updated in forty years.  Are we to believe that those regulations still specifically tell us the only ways to perform work safely?  I once had an argument with another safety professional who my company was working for at the time.  He wanted our oxygen and acetylene bottles taken off the carts and put back in storage each and every night, despite the fact that we were using them again first thing in the morning.  We went back and forth on this and his argument was that “the book” said the bottles need to go in storage and there was no room for debate.  No room for debate, that is, until I handed him OSHA’s Letter of Interpretation saying that the organization recognized the inherent danger in frequently moving and capping/uncapping these bottles, so they allowed a 24-hr period for which the bottles could be considered “ready-for-use” and remain on the cart with the gauges on.  No matter how much we may have argued the danger, until that letter was presented there was no discussion allowed to determine if there was a safer way of dealing with the bottles.

Now, granted, this is a pretty clear-cut case in which there was a right way and a wrong way, without the letter of interpretation to allow for something different, but some situations are not quite as black-and-white and require creativity.  A safety committee, engineer, or other interested party may come up with something that has not been thought of before.  If this idea meets the criteria of keeping the workers safe, it then falls on the shoulders of the safety professional to take the agreed-upon solution and go back to the regulation to make sure it complies with the letter of the law.

As touched upon earlier, this approach seems to come more into play when somebody on the production side of an organization is put in charge of safety.  Let’s face it, when your job has been to get something done, get it done well, and get it done on time, worrying about the method and how safe it is or is not for your workers may not come naturally.  Perhaps there were always other people to worry about that, or maybe there was never anybody at all, but either way, it’s often not a perspective production personnel are trained to approach from.  In this approach, everything is dictated by the bottom line.  An inferior safety product may be purchased simply because it costs less, if a safety product is purchased at all.  The best solution is rarely chosen if it is not also the cheapest solution.  This is the polar opposite of the Safety-First professional.

Do these people want to hurt the workers?  No.  I don’t believe there’s anybody out there that wants to do that.  Many just don’t believe that accidents are going to happen to them.  Either they’re just going to be working unsafely for a brief period of time or they believe their workforce is so good at what they do that they won’t make any mistakes.  Some even may believe that safety is over-hyped, that the regulations and requirements exist only to create more paperwork for their company.  Regardless of why they do it, safety is not made a priority.

Obviously the best approach is a combination of all three of these ‘cultures’.  A good safety professional – or somebody given the authority over safety on a jobsite – should be aiming to keep the safety and well-being of their employees in mind, first and foremost, however this should be done in a way that looks at all of the options available and determines which is best and doesn’t break the bank.