How to Eliminate a Fall Hazard 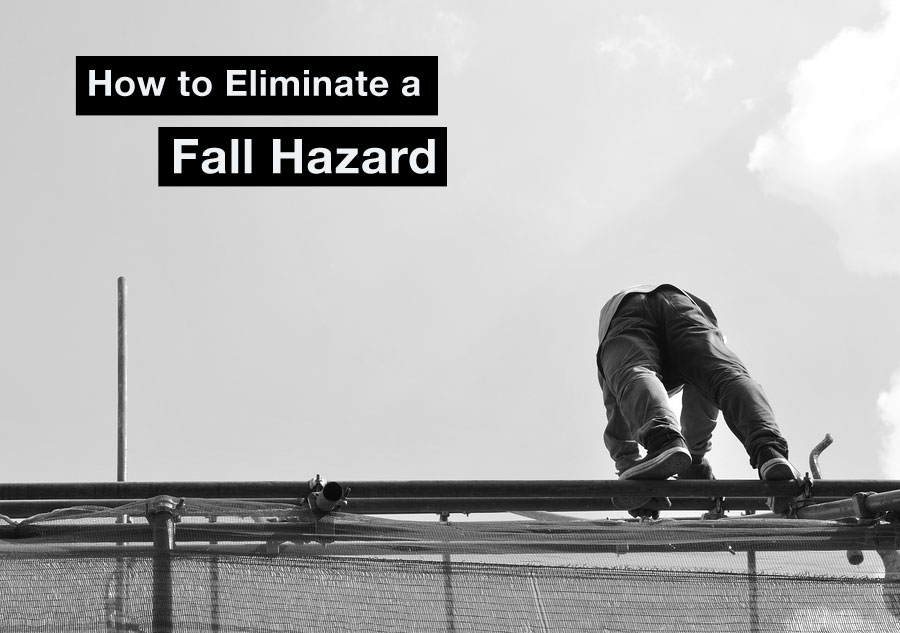 When a company doesn’t plan ahead or take the time to do a job hazard analysis, unsafe work conditions can sneak up on them. This lack of diligence means that employers often reach for the “quick and easy” solution. That solution is usually Personal Protective Equipment (PPE). While PPE is very useful in mitigating hazards to your employees, it should never be the first choice.

This isn’t an opinion; it is OSHA’s “Hierarchy of Controls” which looks like this: 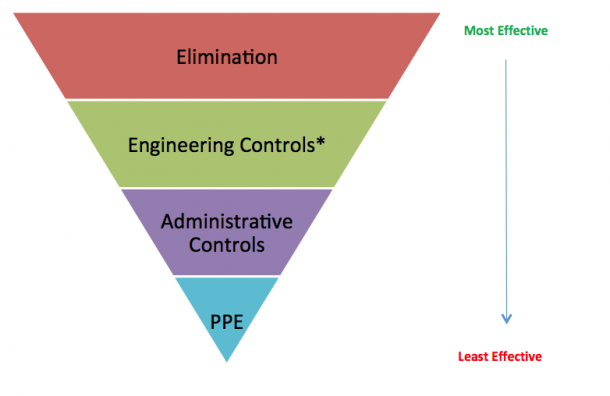 *Note: This is according to a document on OSHA’s website. Some sources include “Substitution” between “Elimination” and “Engineering Controls”.

Let’s break this down and take a look at how it might work for a hazard such as fall protection, starting at the bottom.

Personal Protective Equipment controls are your last line of defense and, therefore, important, but think about how it works. If you are in a fall situation and your safety harness and lanyard (the PPE) have saved you, then that means you had to fall. In other words, your harness and lanyard aren’t doing anything for you while you are walking around and working. They only come into play after you’ve actually fallen. While they do prevent death or serious injury that usually comes with hitting the lower level, there are still plenty of exposures. For example, there are still strong forces being placed on the body that could result in bone or tissue damage, especially if the equipment isn’t being used properly. This “human error” is probably the biggest problem when it comes to PPE. PPE must be worn and used properly. It must be cared for. It must be inspected. If any one of these links in the chain is broken, the results could be traumatic or deadly.

To state it simply, using Administrative Controls means you need to change procedures, place signs, or take other steps to change the way people work. This method, as with PPE, does not eliminate the hazard, it just reduces exposure to the hazard. For example, let’s say there’s an elevated walkway with a rail system. For some reason, whether maintenance or a part of the production process, a section of that rail needs to be removed or a gate needs to be opened. The walkway in our hypothetical situation happens to be heavily traveled during the workday by people who are not involved with the part of the process (or maintenance) that involves removing the rail or opening the gate. Scheduling this work to be completed during off-hours or restricting access to that walkway during the gate/rail opening could be considered an administrative control.

Engineering controls may not be as effective as Elimination (see next section), but they are used more frequently. This is because it is not always possible or practical to Eliminate a hazard. When planned, Engineering controls tend to be achievable and, despite what one might think, not always more expensive than other options. For fall protection, railings are a good example of an Engineering Control; you have changed your environment to vastly reduce the exposure to the hazard. This is not elimination as the very fact that you’re working at heights means there is a potential to fall (somebody could go outside the railing, crash into it with great force, etc.). Railings are passive protection, meaning that they are in place and they protect you without you having to actively inspect something, put it on, and adjust it. A fall does not need to occur in order for them to protect you. This option is vastly better than administrative controls or PPE, yet is often not chosen.

The problem with Engineering controls is that people have been so ingrained with the idea of being “tied-off”, that PPE becomes the go-to solution in a lazy decision-making process. Fall issues? Tie-off! That’s enough time spent on that problem. Perhaps these people don’t want to be bothered coming up with a new idea or perhaps they don’t understand the products they have available to them:temporary railing for construction projects, non-penetrating railings for maintenance work on existing roofs, or for more permanent installations, parapet railings, or ground-mounted railings. With evolving technology, new products become available every day.

Perhaps, though, the reason is cost. Engineering controls must be more expensive, right? This is an unfortunate misconception. The cost of one harness and lanyard may be less than a rail system, but how many do you need?

How much will it cost to train your employees (and re-train if necessary, not to mention training new hires)?

How much will it cost to clean, store, maintain, and replace the equipment?

How much will it cost you in lawsuits when a maintenance contractor goes to work on your roof without fall protection and falls off?

Railings could be less expensive than purchasing harnesses, lanyards, roofing carts, or other mobile anchor points, for example, and are definitely cheaper than legal payouts. When you start diving into it that deeply, the rails begin to look better and better. Engineering controls deserve to be looked at more closely in every situation.

This is the Holy Grail. If you can eliminate a hazard, there is nothing else to worry about. Unfortunately, this is not always possible. Full elimination of a fall hazard, for example, would mean not putting any workers at heights. One example of this that I witnessed a number of years ago was the erection of scaffolding in NYC. Originally, the erectors were up on the scaffold waiting for pieces to be delivered to them by crane. They would receive the pieces and assemble them in place, unprotected by railings or fall arrest systems the entire time. The argument, whether valid or not, was that they could not tie-off. When this response was deemed unacceptable, the process was reviewed. It was determined that the scaffold could be assembled in sections on the ground, before being lifted into place by the crane.

The workers could wait on the previously erected level of scaffolding where they were fully protected by railings to guide the next section into place and secure it. Yes, the erectors relied on the engineering controls of a railing during the connection process, but they had completely eliminated the fall hazard during the assembly process. Another example could be changing bulbs in high locations such as warning lights on smokestacks. Rather than a worker having to climb the stack or use a lift to get to the bulb, the hazard can be eliminated by designing it so that the bulb/light fixture can be lowered to a safe location for replacement.

Elimination is more difficult but it is by definition the most effective. No hazard, no harm. More than any other solution, elimination should be pursued. Change the process, change the location of the work, change the schedule, or do whatever needs to be done to ensure that work takes place without risk.

Unfortunately, this is not always realistic. Try as we might, there just isn’t always a way to do the necessary work without a fall exposure. When that’s the case, work your way down through the hierarchy, only moving on to the next option when all possible solutions in the previous one have been exhausted. You owe it to your employees to take the time to come up with the best solution for their well-being.